We arrived back in Florida on March 27 to spend two weeks visiting our son and daughter-in-law and Darlene’s sister, brother-in-law, and great nephew. We spent a lot of time at Disney and got to attend our church in Lake Alfred. We also got to see the Colorado Rockies play the Tampa Bay Rays.

On April 10, we headed out again to journey toward Vermont, where I’ll be working for the summer as a park ranger. 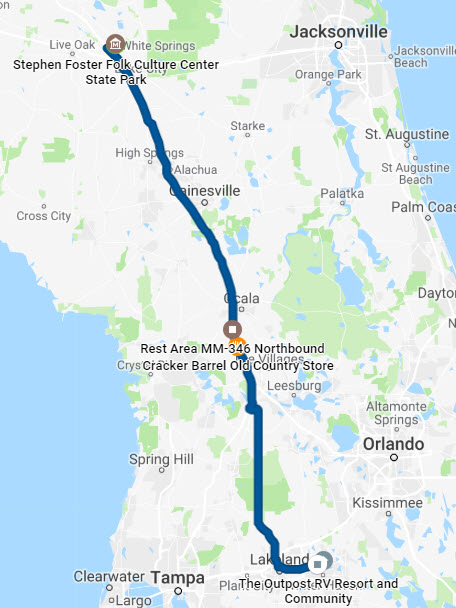 Our first day out, we stayed at Stephen Foster Folk Culture Center State Park in northern Florida. This park was established simply to honor and remember this great American song writer. It’s located on the banks of the Suwannee River, the inspiration for the Foster song “Old Folks at Home (Way Down Upon the Swannee River).

On April 11 we moved on to stay in a KOA campground in Forsyth, GA, just south of Atlanta. 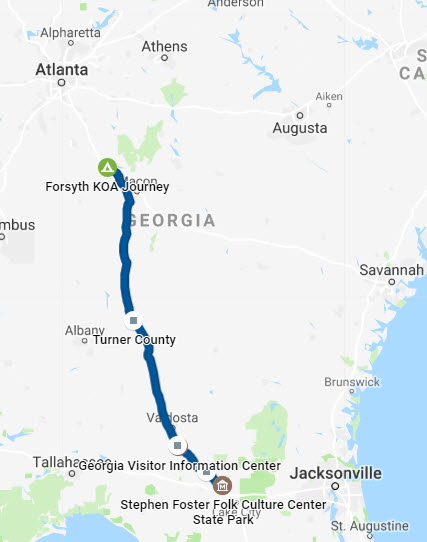 I didn’t like this campground very well. There were two areas in the facility, a wooded section and an open section. Both were very hilly. We were placed in the open section and I was disappointed in the quality of the sites. They were badly eroded from the downhill drainage and coarse gravel was being used to fill in the erosion, but the gravel was just washing back out onto the road. Sites were close together and left little room to walk between the RVs because of the steepness of the hill.

We stayed in Forsyth two days and took the non-travel day to visit Stone Mountain Park, east of Atlanta. I visited the park with my parents when I was in high school, only a few years after the completion of the carving. My initial impression upon visiting the website was that this was going to be a major tourist trap and I was probably not going to enjoy it. After visiting, though, I can say that if I lived in Atlanta, I’d probably get a season pass, especially if I had younger children. The park itself was a beautiful natural area with lots of trails, along with some entertainment/adventure venues that I can see would be very popular with kids.

On April 13 we moved to Payne Campground, an Army Corps of Engineers facility on the shore of Allatoona Lake, just north of Atlanta. This was a beautiful campground, and with our America the Beautiful pass, camping fees were half-priced! 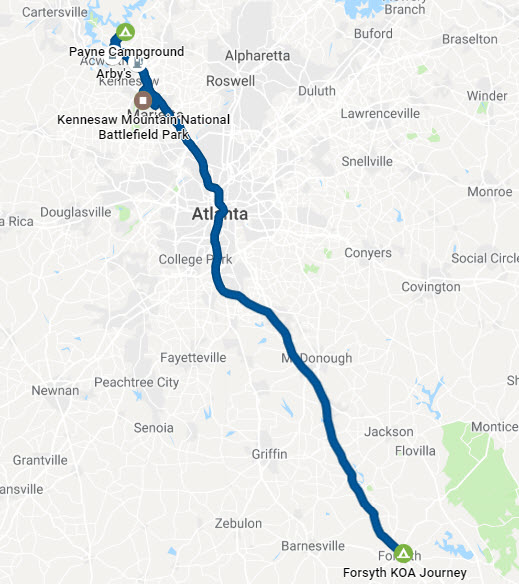 We left Allatoona Lake on April 15 to travel to Pigeon Forge, TN. Unfortunately, Darlene became sick the night before and lost use of her legs for a couple of days. For those of you who don’t know, she has MS and whenever she gets sick, it is not uncommon for her to lose mobility for a period of time. She regained her mobility, but has since had the leg in which she got cellulitis last summer become inflamed and swollen. We’re pretty sure this is an expression of lymphedema. The cellulitis damaged her lymphatic system and, unfortunately, now that leg is prone to extra difficulty with the onset of any illness. We’d appreciate your continued prayers for her recovery! 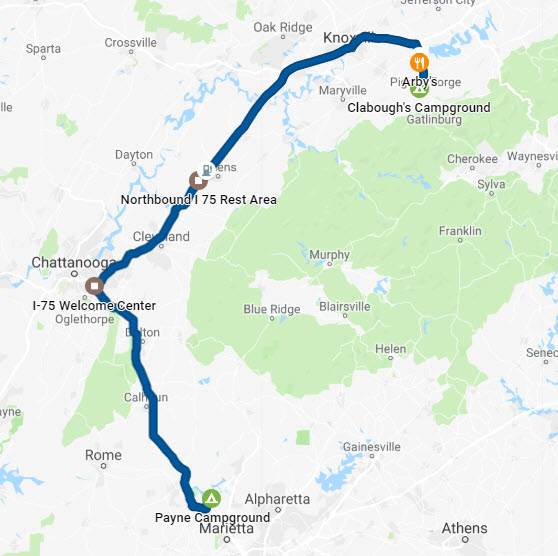 We stayed at Clabough campground in Pigeon Forge from April 15 through April 23. We were unable to get out and about as much as we would have liked, but it was still nice to be able to see Great Smoky Mountains National Park, as neither of us has been there before.

We left Pigeon Forge on Wednesday, April 24 and drove to Wytheville, VA, where we spent the night at Fort Chiswell RV Park. It made for a fine stopover on our way to Pennsylvania. 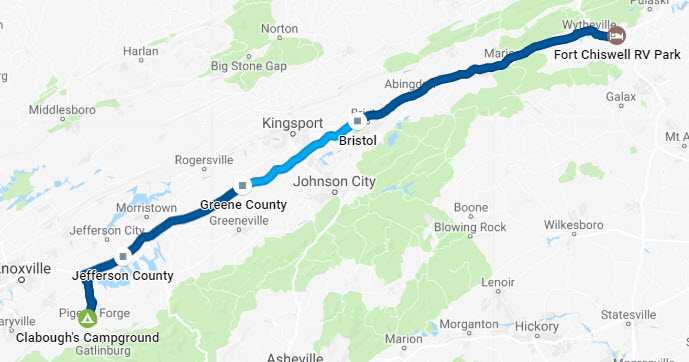 The next day, April 25, we stayed in northern Virginia at Shenandoah Valley RV Park. 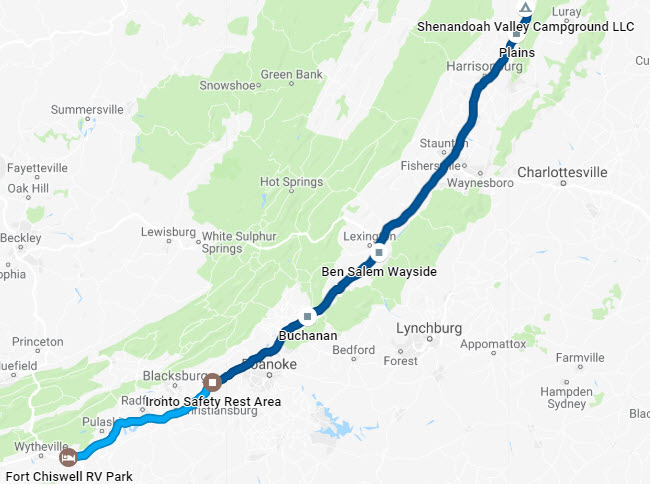 We finished this segment of the trip by staying at the Elizabethtown/Hershey KOA campground south of Harrisburg, PA. It was hilly, but very nicely presented and maintained. We were here from April 26 to April 29. 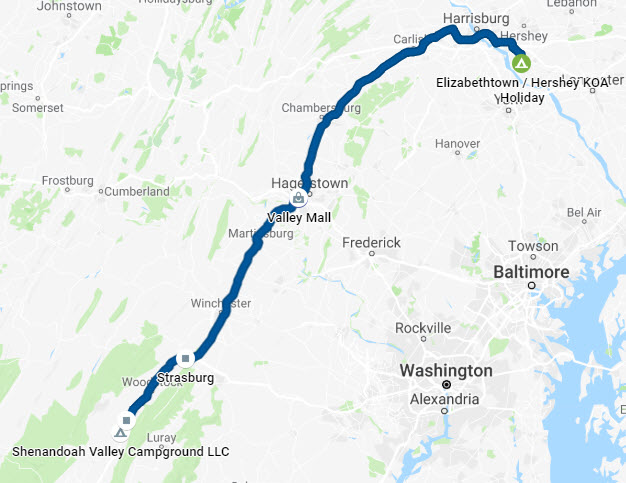 Our final leg of this journey took us to Promised Land State Park east of Scranton, PA. 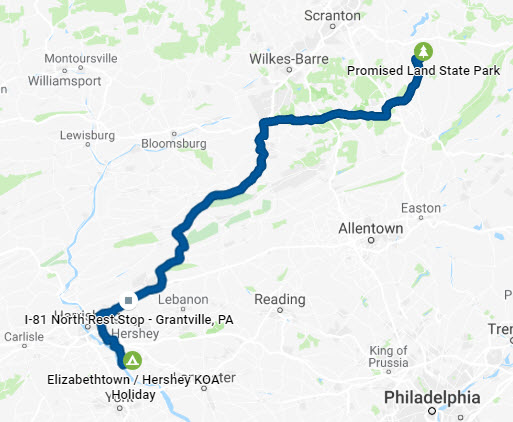 On May 2 we arrived at the Getaway Mountain Campground in Vermont where we’ll be staying for the entire summer. I’ll be starting a job as a park ranger at North Springfield Lake in just over a week. I’ll blog about how that’s going in a few weeks.