This week our texts describe the beginning of Paul’s church-planting efforts in Acts 12-19, Galatians, 1 Thessalonians and 2 Thessalonians, and 1 Corinthians 1-3.

Jesus’ ministry lasted about three years, culminating in his death on the cross as atonement for sin, and his resurrection from the dead demonstrating his victory over the penalty of death. As you read the book of Acts, you see the growth of the church. It was quick, but it’s good to put in perspective the time frame involved. While Jesus’ ministry was three years, the span of the work of his apostles in building the church (Acts) covers approximately thirty-three years.

Acts was written by Luke as a continuation of the story he told in his biography of Jesus (the book of Luke). The first ten chapters focus primarily on the growth of the church among the Jews in Jerusalem and Judea. Starting in chapter eleven, the God instructs his apostles to begin sharing the gospel (the good news of Jesus’ atonement and resurrection) to the Gentiles. These primary initial missions efforts were led by Paul with various companions. 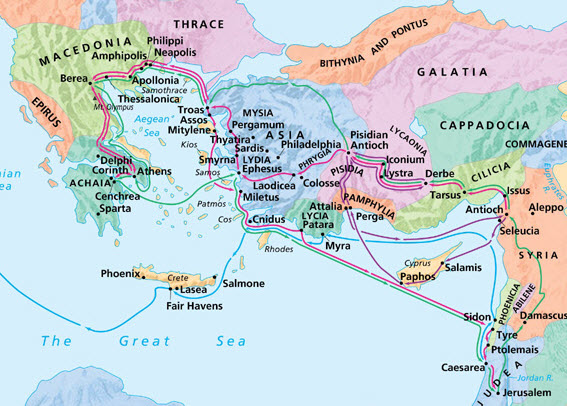 Paul was initially sent by a church in Antioch (near the modern border between Syria and Turkey). He traveled from there to preach in cities on the island of Cyprus, then sailed up to visit cities in Pamphylia and southern Galatia. finally returning to Antioch. During this first missionary trip he would typically enter the local Jewish synagogue first, meeting with interest and curiosity, but would at some point often begin to face resistance (even physical attacks) from the Jews. He would then begin preaching in the marketplace to the Gentiles until the climate became sufficiently hostile to force him to move on. He backtracked to many of these initial cities after several months into the journey to check on the progress of the newly formed body of believers.

After returning to Antioch, he traveled to Jerusalem to report on his work with the Gentiles and to discuss with the other apostles the false teaching of some Jewish believers claiming the Gentiles must convert to Judaism in addition to believing in the atoning work and resurrection of Jesus. That council offered the following decision (Acts 15:22-29):

Then it seemed good to the apostles and the elders, with the whole church, to choose men from among them and send them to Antioch with Paul and Barnabas. They sent Judas called Barsabbas, and Silas, leading men among the brothers, with the following letter: “The brothers, both the apostles and the elders, to the brothers who are of the Gentiles in Antioch and Syria and Cilicia, greetings. Since we have heard that some persons have gone out from us and troubled you with words, unsettling your minds, although we gave them no instructions, it has seemed good to us, having come to one accord, to choose men and send them to you with our beloved Barnabas and Paul, men who have risked their lives for the name of our Lord Jesus Christ. We have therefore sent Judas and Silas, who themselves will tell you the same things by word of mouth. For it has seemed good to the Holy Spirit and to us to lay on you no greater burden than these requirements: that you abstain from what has been sacrificed to idols, and from blood, and from what has been strangled, and from sexual immorality. If you keep yourselves from these, you will do well. Farewell.”

Once this decision was made, Paul wasted no time writing a letter (the book of Galatians) to be sent and circulated to those churches he had planted during his first mission trip. This letter included sharp rebukes on those who were trying to infiltrate the church and put burdens on them which are not part of the gospel of Christ.

He then began his second missionary journey by returning to those churches once again on his way to lands further west. After visiting them, he traveled through northern Asia (see map above) and obeyed the following directions from the Holy Spirit to cross the Aegean Sea into Macedonia.

Paul continued traveling down through Macedonia and into Achaia, following the same pattern established on his first missions journey. Along the way (in Corinth) he wrote two letters to the church he established in Thessalonica, based on reports he received from his traveling companions. He addressed topics that had arisen largely again from erroneous teaching in that church. He remained in Corinth for about eighteen months and then headed back across the sea to Ephesus and on back to Antioch.

After remaining in Antioch a while, Paul returned again to the Galatian churches on his way to spend about three years in Ephesus, from which he wrote his Corinthian letters. I’ll pick up the story there next week.