I haven’t posted a travel update in a while. If you’ve been following our story you know that Darlene has had a difficult month, having contracted a very bad case of cellulitis in her leg. Just to bring everyone up to date, here’s a recap of the last month since the last travel blog post.

I ended my last travel blog indicating my intention to go kayaking. I did that in Lake Conoy in the center of the park. I rented a kayak at the nature center. 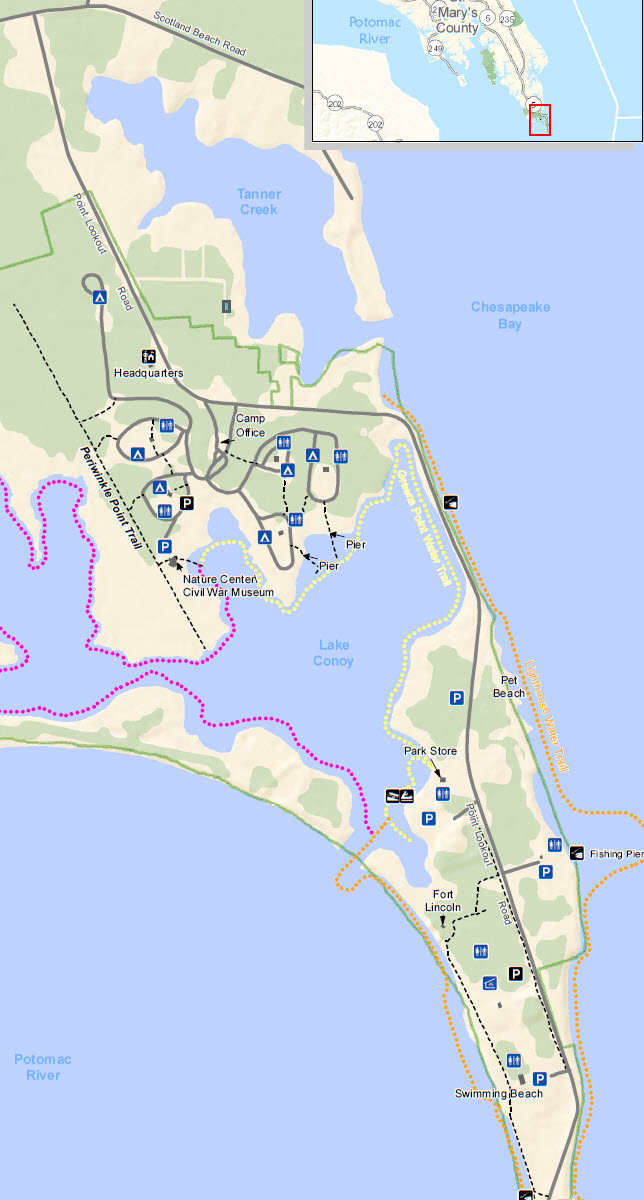 Darlene’s leg had begun hurting on Thursday, and by Friday evening she had a fever. We spent Saturday just relaxing in hopes that she would feel better. By Sunday, the pain in her leg had gotten so intense that we stopped at an urgent care facility on the way to Delaware, but opted not to go in. We drove 155 miles from Point Lookout to Lums Pond State Park in Kirkwood, Delaware, near Newark.

That night she was in sufficient continual pain to warrant a visit to the emergency room at Christiana Hospital in Newark.

They admitted her for cellulitis but discovered a bleeding duodenal ulcer as well. She had lost enough blood to warrant administering 5 units of blood in replacement. Over the course of the next week the ulcer was repaired and blood hemoglobin count returned to normal, but the cellulitis remained. Various IV antibiotics were tried and she was finally released a week later. As best as we can tell, she was exposed to some nasty bacteria when we waded briefly in Chesapeake Bay.

Lums Pond State Park is the closest campground to the hospital. The weekends (Friday and Saturday nights) are booked up throughout the summer. However, the staff was great to work with me on trying to get a campsite during several of the weekends. However, some weekends there just were no options available so we ended up moving away for 2 nights and then returning for the next week. 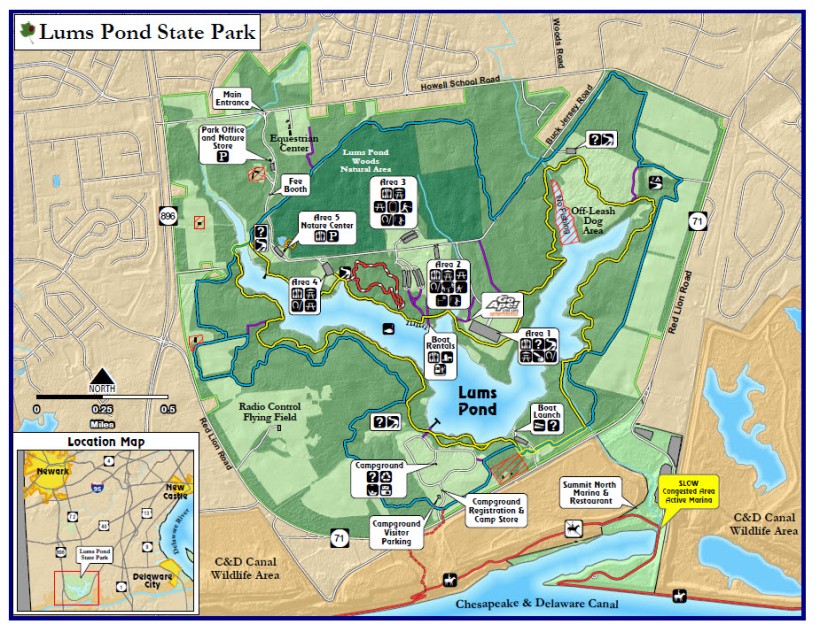 During Darlene’s stay in the hospital (July 9 to July 16), I commuted from the campground to the hospital, returning to the motorhome mid-day to let Scooter out. During that week, there was a radio-control airplane show going on in a field designated as an R/C flying field. While I was walking Scooter in the campground one day, I heard and saw 3 of the planes flying beyond the treetops.

On a couple of days I took Scooter to the very large off-leash area they had. 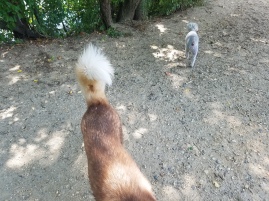 The park also has a nice trail system. 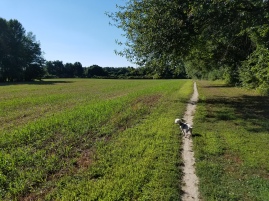 Near Lums Pond is the Delaware Memorial Veteran’s Cemetery and the Chesapeake & Delaware Canal. I drove by both several times during trips to the grocery store and pharmacy. 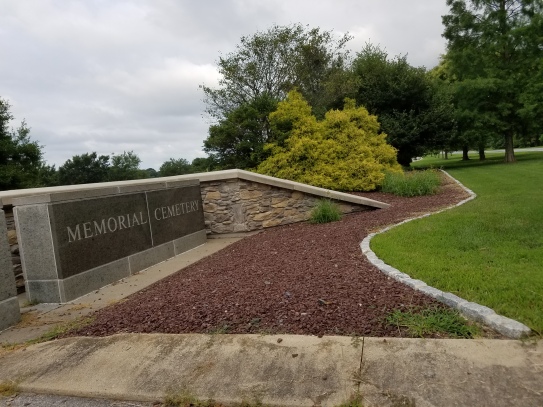 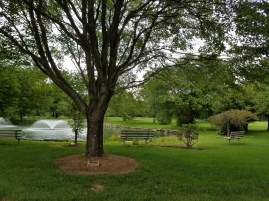 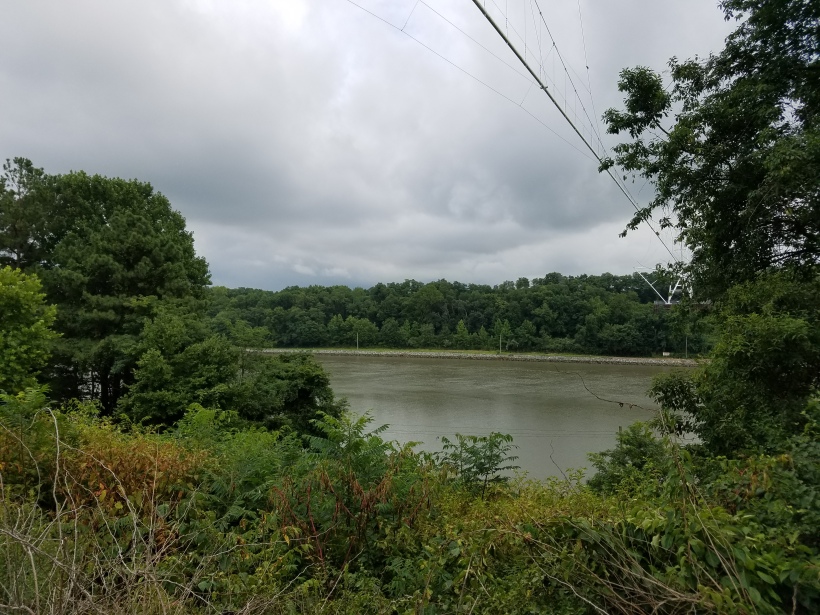 We had to leave Lums Pond for this weekend. We moved 15 miles away to the Woodlands Camping Resort. 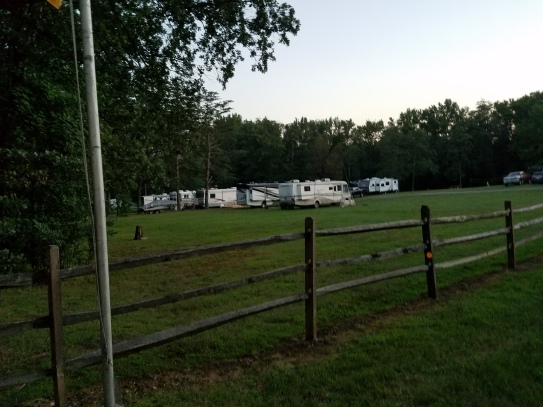 I nearly threw a bag of trash on top of one of the guests!

We moved back to Lums Pond. We had to hang around this week because Darlene had two follow-up doctor appointments. She’s also still in a lot of pain and is pretty much confined to keeping her leg elevated on the couch. She was able to get out of the motorhome for a brief time later in the week. 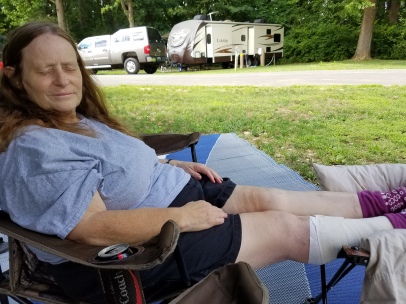 Again, Lums Pond had no availability for the weekend and neither did Woodlands. The next closest available spot was 53 miles away at the Philadelphia/West Chester KOA. 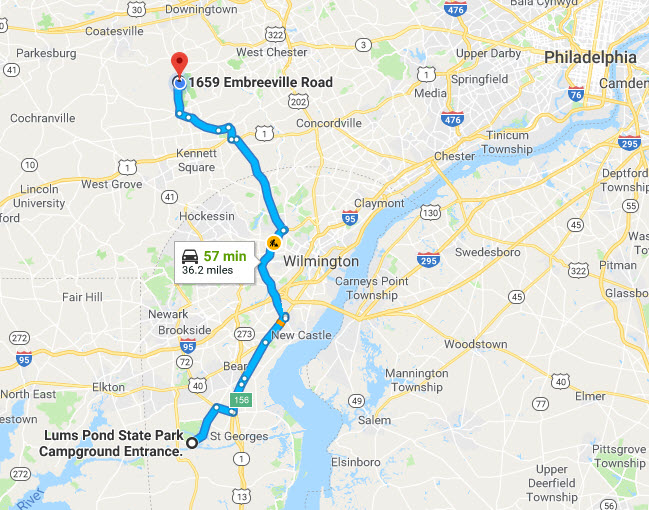 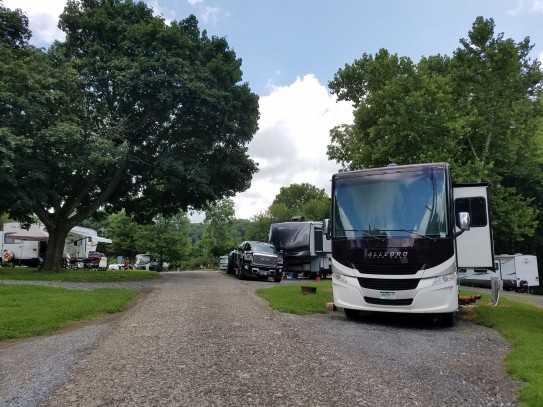 We are heading back to Lums Pond State Park tomorrow. I don’t know how much longer we’ll be here. Darlene’s leg is still so painful that she can’t travel more than a couple of hours at a time. She also still has some follow-up doctor appointments. As soon as we can, though, we’re going to scrap the Canada trip for now and retreat to Florida where we’ll spend at least a couple of months recovering and regrouping.