This week our texts are 1 Kings 17-22, 2 Kings 1-10, and 2 Chronicles 18-22. Additionally, some of the texts from last week are critical to understanding the significance of what these passages are all about, specifically 1 Kings 12. As you recall, King Solomon, by having so many wives and concubines, turned his heart away from full devotion to the Lord and built altars to other gods. God told him that he would tear the kingdom away from his son as a result. That son was Rehoboam. Rehoboam decided to follow bad advice of his friends and try to oppress the people of Israel for his own gain. The tribes of Israel made Jeroboam, a leader Solomon had put in charge of all laborers, their king instead. Only the people of Judah remained loyal to Rehoboam. Thus the kingdom of Israel was split. Ten tribes became the new nation of Israel, and Judah (along with Simeon, which Judah’s territory surrounded and basically absorbed) became its own independent nation.

The following chart is one produced by Lifeway for use with The Gospel Project Chronological series of Bible studies. I’ll be referencing it periodically over the coming weeks as we work our way through the remainder of the Old Testament.

There are several keys to understanding the ensuing history of the kings of Judah and Israel. First, the books of Kings and Chronicles are written in such a manner to try to establish the time links between the two kingdoms. So, you’ll find as you read them statements such as 1 Kings 15:1: “Now in the eighteenth year of King Jeroboam the son of Nebat, Abijam began to reign over Judah.” This is to maintain continuity in understanding the simultaneous history of the two nations with respect to each other. Second, you’ll find that each of Judah’s kings are compared in some way all the way back to David (to whom they are all related). You’ll read statements indicating whether the king followed the Lord as David did, or not. Israel’s kings are all compared to Jeroboam, even though there is no continuity of blood lines among them. The statements regarding these kings will say something about them walking in the sins of Jeroboam.

David was a man who sought to do God’s will, not always succeeding, but his heart’s desire was there. Jeroboam’s sin, which ultimately was fatal to the nation of Israel, was to lead them away from obedience to God and into idol worship. Here’s what happened (1 Kings 12:26-33).

And Jeroboam said in his heart, “Now the kingdom will turn back to the house of David. If this people go up to offer sacrifices in the temple of the LORD at Jerusalem, then the heart of this people will turn again to their lord, to Rehoboam king of Judah, and they will kill me and return to Rehoboam king of Judah.” So the king took counsel and made two calves of gold. And he said to the people, “You have gone up to Jerusalem long enough. Behold your gods, O Israel, who brought you up out of the land of Egypt.” And he set one in Bethel, and the other he put in Dan. Then this thing became a sin, for the people went as far as Dan to be before one. He also made temples on high places and appointed priests from among all the people, who were not of the Levites. And Jeroboam appointed a feast on the fifteenth day of the eighth month like the feast that was in Judah, and he offered sacrifices on the altar. So he did in Bethel, sacrificing to the calves that he made. And he placed in Bethel the priests of the high places that he had made. He went up to the altar that he had made in Bethel on the fifteenth day in the eighth month, in the month that he had devised from his own heart. And he instituted a feast for the people of Israel and went up to the altar to make offerings.

So Jeroboam’s sin was to dissuade the people from obeying God’s clear directives about worship of Him, and he also led the people to worship idols.

In the chart above, several colors and symbols are used, as follows: 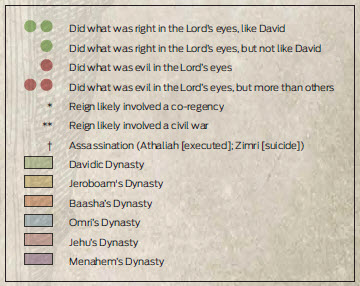 Notice the continuity of David’s line in the kings of Judah.

God had promised David that “your house and your kingdom shall be made sure forever before me. Your throne shall be established forever.” (2 Samuel 7:16) Ultimately, David’s throne culminated in his direct descendant Jesus, who stands before his throne now at the right hand of God in heaven. (Acts 7:55) In contrast, the kings of Israel had short-lived dynasties, limited in each case because of great sin.

Also notice the color-coded circles next to the kings’ names. Judah has all the “green” ones, with one exception in Israel (Jehu).

Along with the kings of Judah and Israel came the prophets. Prophets were called by God to speak His words to the people and especially to the kings, to call them to repentance, to proclaim God’s plans and intents, and to pronounce God’s judgments. Not all prophets are named for us and not all prophets wrote books preserved in the Bible. Two major prophets who were sent to prophesy in Israel during the reigns of Ahab and his successors were Elijah, followed by Elisha. These were not the only prophets in Israel, but their story is a fascinating one. We see in Elijah a man who had great faith in the power of God, calling for a three-year drought as judgment on Ahab (1 Kings 17) and calling down the fire of God as judgment on the prophets of Baal (1 Kings 18). But he was also a man prone to discouragement and depression (1 Kings 19). Elijah and Elisha both were used by God to reveal His person and power to the people of Israel and to those of surrounding regions not only through words, but through the working of miracles as well. This foreshadows the great miracles performed by Jesus during his ministry.