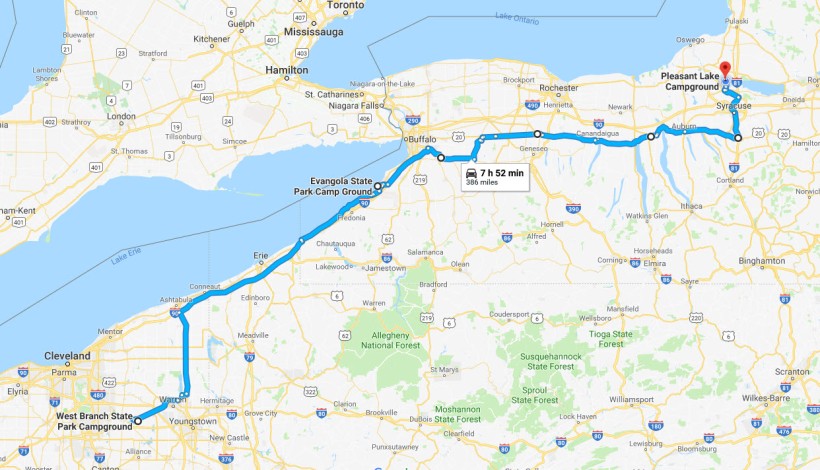 Thursday 31- During our 3 night stay in the Cleveland area we operated out of West Branch State Park, which is southeast of the metro area near the small town of Ravenna. It is heavily wooded, but does have lake access and a disc golf course. I didn’t make it over to play the course here.

We spent some time exploring Cuyahoga Valley National Park. I had never heard of this park until we got to Ohio. It is a park established in 2000 largely due to a grassroots effort of local citizens to protect the natural setting in the valley lying in the Cleveland/Akron metropolitan corridor. Besides the flora and fauna, the valley has a history of human settlement and was the starting location for the Ohio & Erie canal, which stretched from Lake Erie south all the way across Ohio to the Ohio river, which forms the boundary between Ohio and Kentucky. The canal was built in the 1820s and was a part of the extensive eastern U.S. canal system which supported the transportation of goods prior to the coming of the railways.

We also explored Cleveland a little and went grocery shopping at the West Side Market, and indoor/outdoor food market that has been in operation since 1840 (1912 in its current location). It was fun to see all the vendors and the variety of goods available there.

Evangola State Park is right on the shore of Lake Erie. It has a nice, open campground, a swim beach, and a disc golf course.

On Sunday, we attended the First Baptist Church in Silver Creek. The church has a beautiful old building with a pipe organ and stained glass windows. The people in the congregation were very friendly and welcoming to us. The pastor preached a sermon on Philippians 2:1-4 on church unity and the treatment of others.

We also went to see the most recent Star Wars movie (Solo) at a movie theater in Angola. This theater was originally opened in 1924 as a silent movie house. It has updated sound and digital project equipment, but it still has the look and feel of an old-time theater. They show one movie per day and switch out the movie every 3 weeks. The theater is owned and operated by sasi, inc., which provides services and employment to people with disabilities.

While in the Buffalo area, we got to see Niagara Falls. This is a classic destination. The Niagara Falls State Park is right next to the falls. We rode the Maid of the Mist boat, which takes you right along the base of the falls where you are surrounded on three sides by the thundering water.

While in Buffalo, we had lunch at the Anchor Bar, which is the point of origin for the famous Buffalo chicken wings.

We traveled another 221 miles on to the Syracuse area, where we stayed at Pleasant Lake Campground. I’ll relate information about that next week.