We only moved 18 miles from Greenbo Lake State Park to the Ashland/Huntington West KOA because of difficulty finding an available site over Memorial Day weekend. While in the Ashland, Kentucky area, though, we did several things. First, I have been thinking for some time that I was looking forward to getting a haircut in some of the smaller towns of America to revisit what that would be like. I grew up in a small town in southeast Texas and had experienced that before (think Floyd’s barbershop in Mayberry on the old Andy Griffith TV show).


Chris’s barbershop did not disappoint. The shop is decorated with lots of locally produced artwork including portraits of John Wayne, Elvis, Chris, and a number of Christian themes. As Chris cut my hair, he told me about many of the local people and history of the place. He is a Christian (I asked), and he also used to play baseball for local teams when he was younger. He told me about Greenbo Lake fishing, and turkey hunts, and being coached by a former world-series pitcher, and the local sports rivalries. Also about many family names and their relations whom I can’t recall. It was a wonderfully refreshing experience! 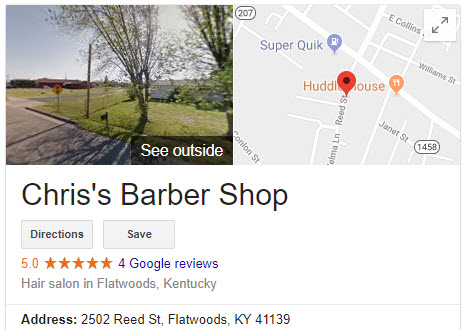 Another incident happened a few days later with another one of the locals. Darlene and I were having breakfast at a local Huddle House, an eastern chain similar to Waffle House. Just as we sat down at a table and ordered our coffee, I saw a flailing of arms and bags outside the window. I looked out and saw that a man had just fallen. He was on crutches and only had one leg. I jumped up and ran out the door to help him. After getting him back up on his foot and crutches and helping him to his truck, he told me a little about himself as I helped him clean up his scrapes (elbow, knee, and forehead). He lives with his wife near a local lake and is retired. He lost his leg from a gunshot wound (I don’t know any more than that). He had a prosthetic leg, but it’s being redone for him because it’s too short. He was there to pick up some burgers for lunch. The restaurant redid his order and also helped check to see that he was okay. He thanked me for my help and told me to ask around the lake anytime I’m in the area. People would know him and tell me where he lives. He’ll take me fishing anytime. He is also a Christian (I asked).

Ashland has a museum called the Highlands Museum and Discovery Center. This is one of the over 1400 ASTC (Association of Science and Technology Centers) museums across the country that our membership with the Denver Museum of Nature and Science allows us free admission to. This small museum had an oddball but interesting variety of collections. They were themed around military, sports, country music, and local history and consisted of artifacts associated with or donated by locals. I found the re-creation of an 1870’s one-room schoolhouse particularly interesting.

We attended Heritage Free Will Baptist Church of Ashland on Sunday. The pastor there only has one more Sunday with the church. He’s been on staff since 2013. He preached a sermon from his “Fixer Upper” series on Ezra and Nehemiah from Ezra 10 regarding repentance and restoration. I’ve never been to a Free Will Baptist church. I researched their beliefs a little before attending. They are Christian brothers and we worshipped the Lord that day!

Our KOA campground was right next to the Northeast Kentucky Veteran’s Cemetery. I took Scooter on a walk there. It’s a beautiful, but small, cemetery. I saw markers of local veterans from WWII, Korea, Vietnam, Afghanistan, and the Persian Gulf.

One final thing we saw in this area was an old covered bridge. I don’t know much about it, but it was in a rather obscure little area. The website descriptions indicate it’s open to foot traffic, but there were fences closing both ends.

We traveled 192 miles from Ashland to Wolf Run State Park in Ohio. While we didn’t stay in West Virginia, let me just say “West Virginia, you are seriously behind in maintaining your interstate highways. These were the worst interstates I’ve ever traveled on.” Our home has been through an earthquake, it seems like!

If you haven’t figured it out yet, I tend to prefer state park camping to private campgrounds. The state parks have more privacy and scenery. We only stay where there are electric hookups. Many of the state parks have this available, although many do not have water or sewer hookups at the sites. However, for 3 or so days, this is not a problem. We’re easily able to shower, cook, wash dishes, and do laundry on our water reserves for that length of time. Wolf Run Lake was pretty.

There was also an interesting bit of history in the area that we learned about. The U.S. Navy had an WWI era rigid helium-filled airship (the USS Shenandoah) which was in service from 1923 to 1925. It was 680 feet long and 93 feet tall. It had a total of 57 flights with the last one ending in a crash. It got caught in severe weather on September 3, 1925 and broke into 3 pieces, each of which crashed in separate crash sites. These 3 sites all lie in the area near Wolf Run.

We drove 117 miles on to West Bend State Park, planning to see what there is in Cuyahoga Valley National Park. I’ll relate those tales in next week’s blog.