Now that we’re starting to get more of a routine going, I’m going to change the travel blogs to be regionally-based-rather than day-based. I’m finding that this full-time RV living is more like living in a traditional house. You don’t necessarily do things every day that are particularly interesting to a blog reader (e.g. well, we did laundry today, etc.). Like living in a traditional house, there are moments each day which bring memories, but these are often mixed into the mundane as well. Think of it as the memories you might have of sitting outside in your back yard relaxing and talking or playing games, only your backyard keeps changing locations!

Elizabethtown, Kentucky
We spent a week using this town as our home base. I mentioned last week that we met my brother here for a brief visit as they were passing through. There were a lot of interesting places in the local area. I mentioned last week as well our visit to Abraham Lincoln’s birthplace. We also drove north to Fort Knox, the location of the nation’s gold reserves and an army base. Speaking of army base, I now know that following the signs to the visitor center of the base is not quite the same as following similar signs in a national park. We pulled into the visitor center parking lot at Fort Knox and were just about to open the door when I read the sign “Visitors take a number and have a seat”. This was probably not the kind of visitor center I’m used to! We decided not to ask to see the displays of gold and history of the base there!

Another attraction that was very interesting was Swope’s Cars of Yesteryear Museum. Apparently the Swope family has owned auto dealerships in the area for over 60 years and the patriarch, Bill, had a passion for collecting cars and loved to show them to people. This museum is the result. It’s free and has a pretty amazing collection of cars!

Mammoth Cave National Park, Kentucky
Mammoth Cave is the longest cave network in the world, with over 400 miles of passageways mapped so far. We spent parts of 3 days here, commuting from our campsite in Elizabethtown. The National Park Service offers a number of cave tour options. We did the Accessible tour and the Frozen Niagara tour. They have a very well-done visitor center also, and we didn’t even have to take a number and be seated to enjoy it (see Fort Knox story above).

Glendale Campground, Kentucky
I talked a bit about this campground last week. It was very nice. I’ll just mention the wildlife encounter we had on the day we packed up to leave. I’m not knowledgeable about snakes, except that I don’t like them. This one was crossing the road next to our site and it made me a bit skittish about crawling around on the ground to hook up our tow vehicle behind the motor home! If anyone knows what kind of snake this is, please let me know in the comments. 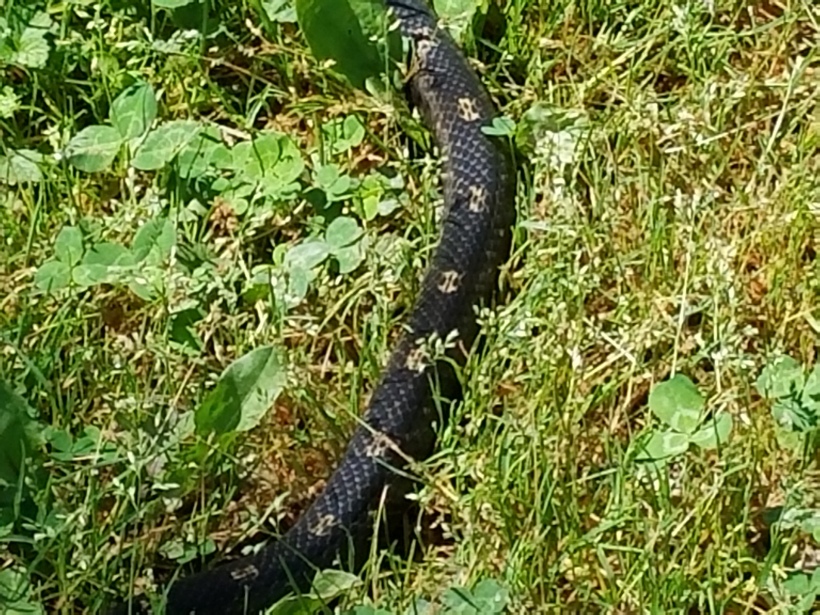 Another “wildlife” encounter here have been the ticks. We’ve seen them on our clothes (fortunately none attached to us) and Scooter had 3 attached to him that I had to remove. Not fun.

Travel Day from Elizabethtown to Greenbo Lake
We drove 211 miles from Elizabethtown to our next destination in extreme northeast Kentucky. I didn’t take any pictures while driving (of course), but it was very apparent as we approached Lexington, Kentucky (specifically in Versailles) that we were in horse country. I’m not knowledgeable about horse racing, but the few horse movies I’ve seen (e.g. Seabiscuit and Secretariat) about horse racing didn’t do justice to the money and ranches associated with the sport. There were some amazing homes and ranches in this area.

Greenbo Lake State Park, Kentucky
To be honest, we chose this State Park because we were franticly trying to find an available campsite over Memorial Day weekend. As is typical for campsites, it’s pretty easy to find openings during the week, but weekends are tougher. Memorial Day weekend is the king of tough-to-get campsites. Like all the Kentucky (and Ohio – we looked there as well) State Parks, reservations were full for the weekend, but I managed to find a weekend spot at a nearby KOA Kampground, which I’ll talk about next week after we’ve actually seen it and stayed there. Greenbo Lake just happened to be close by so we came here for the days prior to the weekend.

Greenbo Lake State Park has a beautiful campground with FULL hookups (e.g. 50-amp electric, water, and sewer). For the weekdays, we had the grounds nearly to ourselves, the only occupants in the back loop. There is a lodge in this park, not unlike a typical national park lodge. Also lots of picnic sites and a marina for the no-wake lake, which rents pedal boats, canoes, and pontoon boats. Apparently it’s a good fishing lake.

Housing update
We closed the sale on our Denver home this week and had a moving company pick up all our stuff. Many thanks and kudos to my sister for overseeing that process for us. It took the movers 13 hours to load up all our possessions and start them on their trek to Florida. Speaking of Florida, we’ve made an offer on a house in Lake Alfred (a suburb of Orlando) and hope to hear on that soon.

As some of you may or may not know, my wife, Darlene, has Multiple Sclerosis. If she gets sick, it’s bad news for the functioning of her legs as the MS seems to kick in and she has pretty severe difficulty getting around. Well, she came down with something on Sunday of this week and had a pretty rocky couple of days, unable to get out of the RV on Monday or Tuesday, and even difficulty getting in and out of bed. I got worried enough Monday night that I called 911 to get paramedics to help get her up. Ultimately they just checked her vitals and she became alert enough not to need to go with them. She’s doing better now. This happens on occasion (perhaps less than once a year). Please pray that she will continue on the road back to health and that these relapses will remain minimal. Just being honest and open here!